The objective of presentation by Garry Jacobs was to explore the potential for collaboration between the physical and social sciences to arrive at a more cohesive and effective framework by exploring a series of questions, including -

The Academy hopes that this meeting will lead to on-going collaboration with CERN on this project. 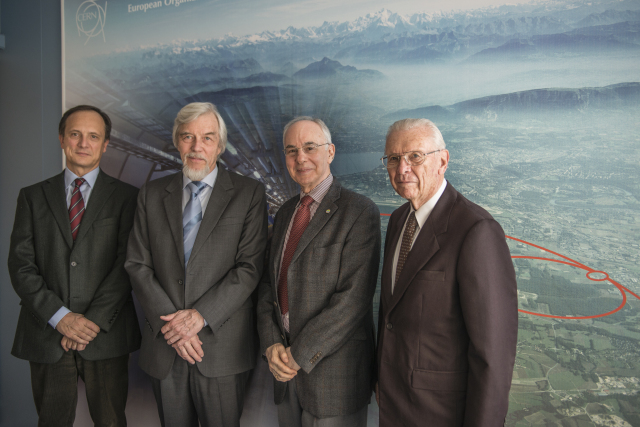 On 13 March 2014, Rolf Heuer, the Director-General of CERN and Garry Jacobs, the Chief Executive Officer of WAAS, signed an MOU (in the presence of Herwig Schopper and Maurizio Bona) providing the basis for future cooperation between the two organizations. CERN, the European Particle Physics Laboratory, celebrating its 60th anniversary this year, has become the focal point for more than 10,000 visiting scientists and engineers from all over the world. Since its founding, it not only had the task of supporting scientific cooperation but to promote ‘science for peace’. WAAS, an international think tank established in 1960, is the only global academy assuring common endeavour to address the challenges and opportunities facing global humanity today and supporting worldwide peaceful scientific cooperation.

In the MOU the two organisations agreed to provide intellectual and technical support for initiatives taken by one institution or the other, and to participate in providing and receiving information resulting from the progress and studies conducted by the other. Some fields have been identified for special emphasis in the development of collaboration between the two institutions. Among them one finds the establishment of interlinks between the natural and human sciences, a better access of women to science, the promotion of scientific and technological education and the creation of scientific networks, with particular focus on developing countries and on youth. The two institutions will collaborate to evolve strategies aimed at expanding the global delivery system for higher education in order to address the rapidly increasing demand and urgent need to improve the quality and relevance of higher education and lifelong education to social life.

Informal contacts between the two institutions had been established before the MOU was signed. CERN was a co-sponsor of the international conference on “Opportunities & Challenges for the 21st Century: Need for a New Paradigm” organised by the United Nations in Geneva and World Academy on June 3, 2013,

which offered K. J. Tokayev, the former Director-General of the United Nations Office in Geneva, Ivo Šlaus, the Honorary President of WAAS, and Rolf Heuer, the Director-General of CERN, the opportunity to explain the intentions of the respective institutions in public talks and to establish first contacts. These were followed later by informal visits of Ivo Šlaus and Garry Jacobs to CERN initiated by Herwig Schopper leading finally to the signing of the MOU.

As a first result of the agreement of cooperation, a colloquium talk by Garry Jacobs was organised at CERN titled ‘Insights from the physical sciences and their relevance to the evolution of social science’ on 13 March 2014.